Commencement celebrates the 'compassion, justice and critical intelligence' of Emory's Class of 2016

Steeped in tradition, Emory's 171st Commencement honored the diverse achievements of this year's 4,585 graduates, distinguished by their commitment to using knowledge in service to the world. 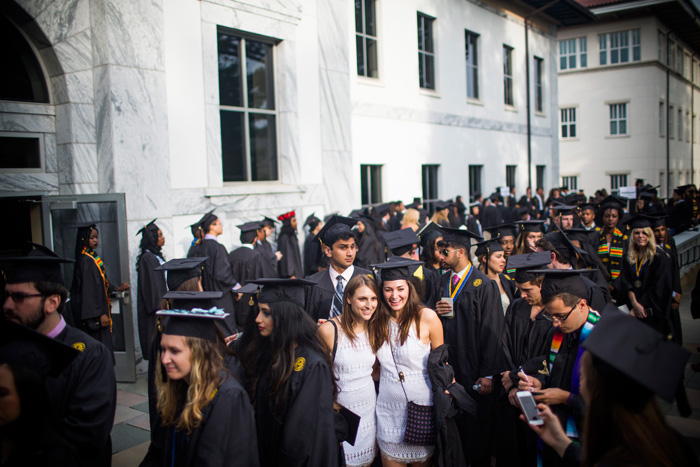 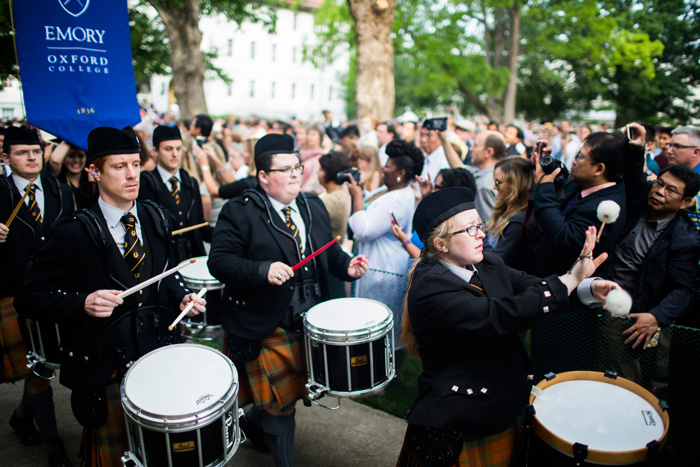 Drums lead the procession into the university-wide Commencement ceremony. 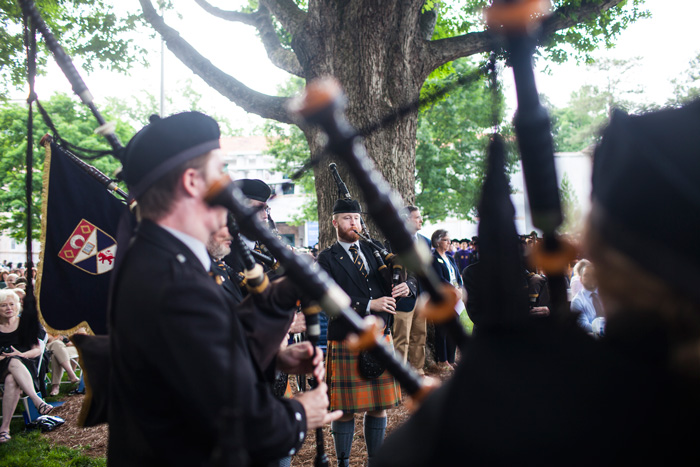 Bagpipes are part of the traditional procession into Commencement. 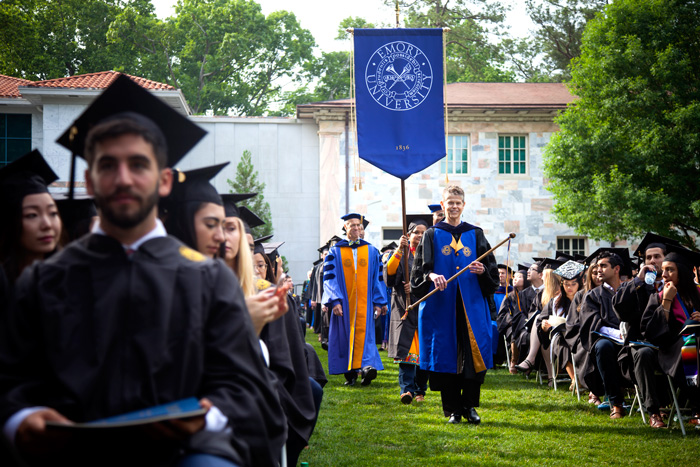 The platform party processes to the stage for the start of the 171st Commencement. 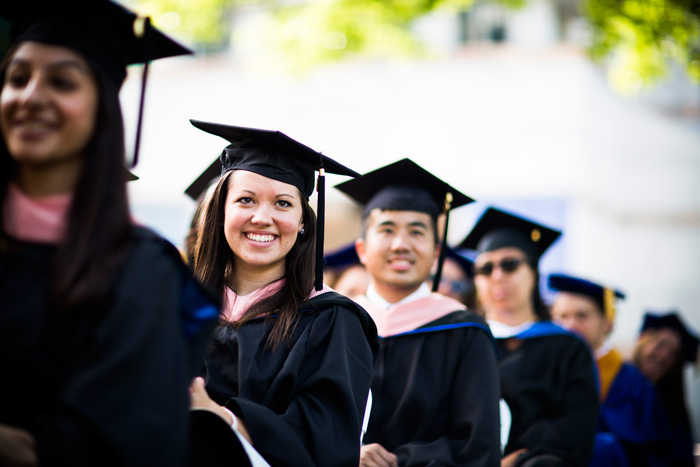 Students are all smiles as they wait for the Commencement ceremony to officially begin. 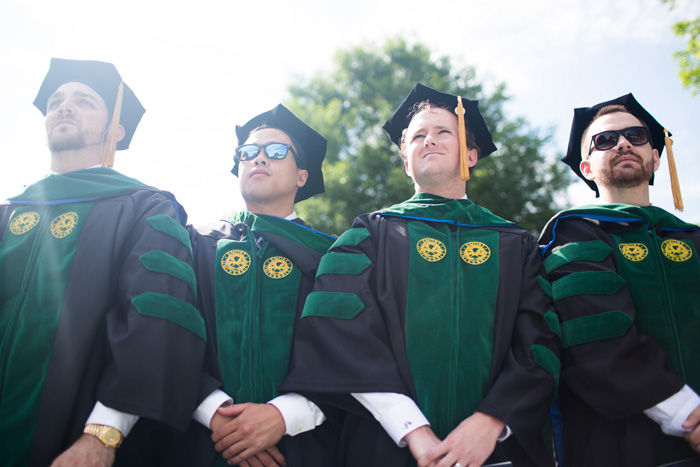 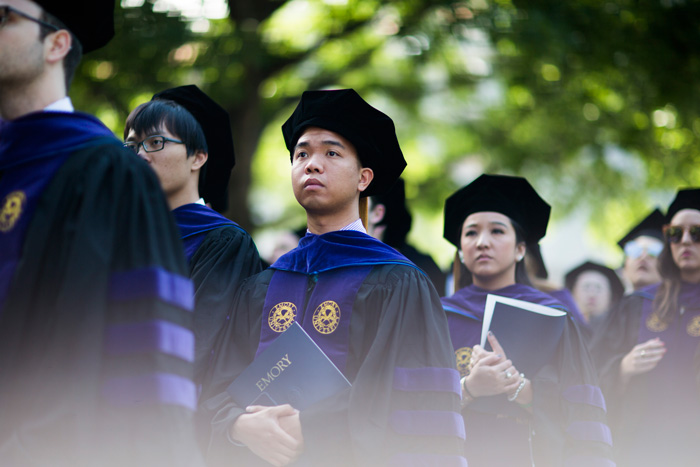 This year's graduating class includes students from 49 states and 76 countries. 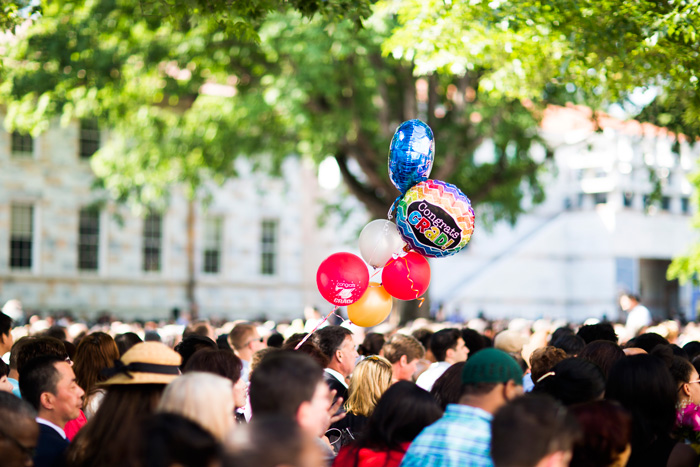 A crowd of about 15,000 fills the Emory Quadrangle for Commencement. 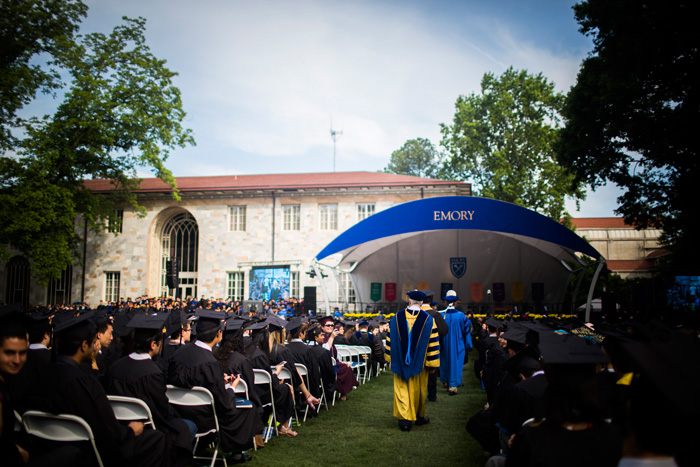 Emory President James Wagner concludes the procession to the stage for Commencement. 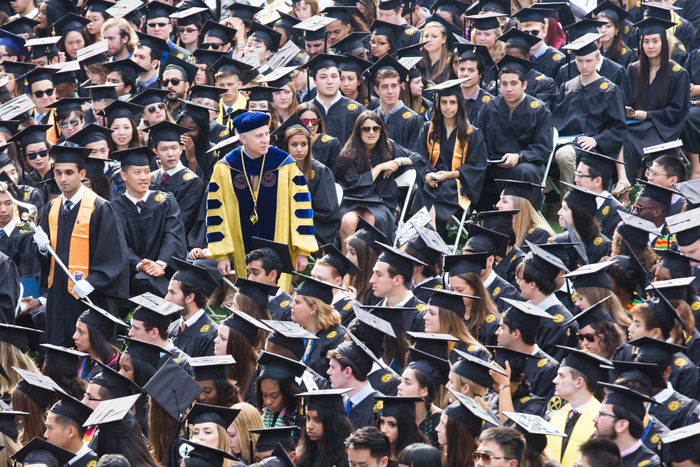 President Wagner will retire in August after leading Emory for 13 years. 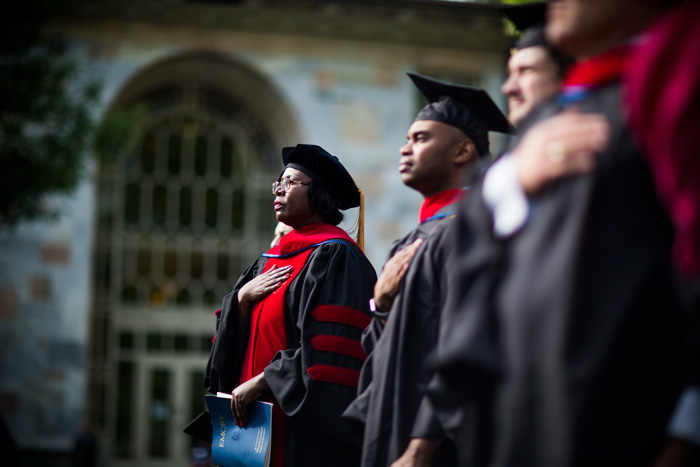 Graduates, faculty and other attendees stand for the national anthem at the start of the Commencement ceremony. 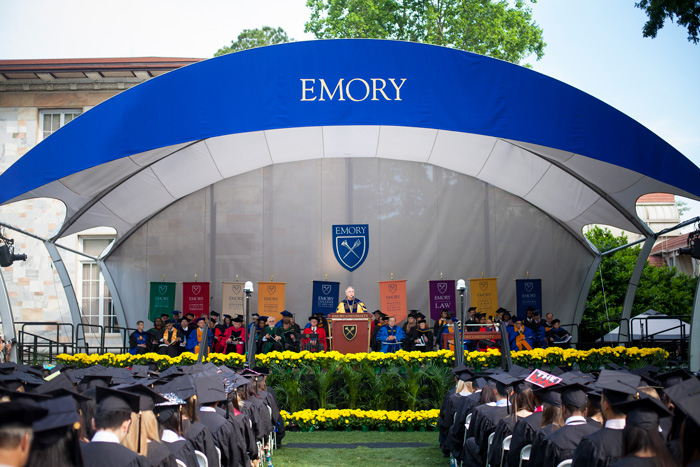 Presiding over his last Emory Commencement, President Wagner praises the Class of 2016 as "entrepreneurs of care." 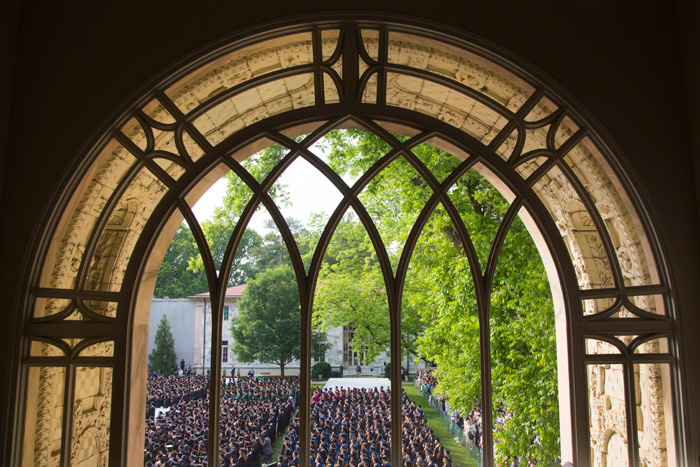 The Emory community "demonstrates again and again that a university can, and I believe must, have a soul," President Wagner tells Commencement attendees. 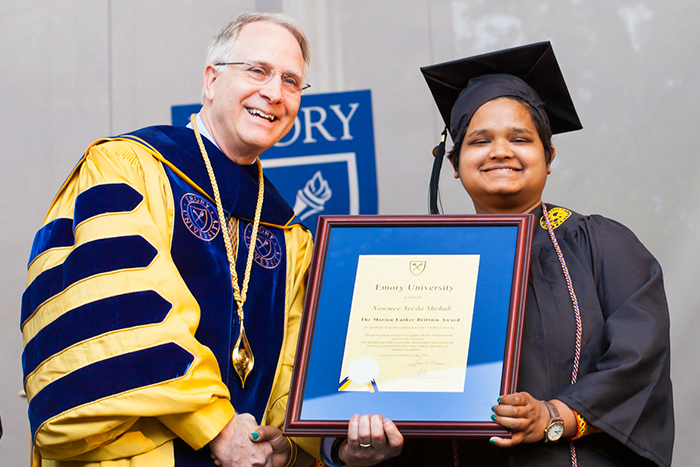 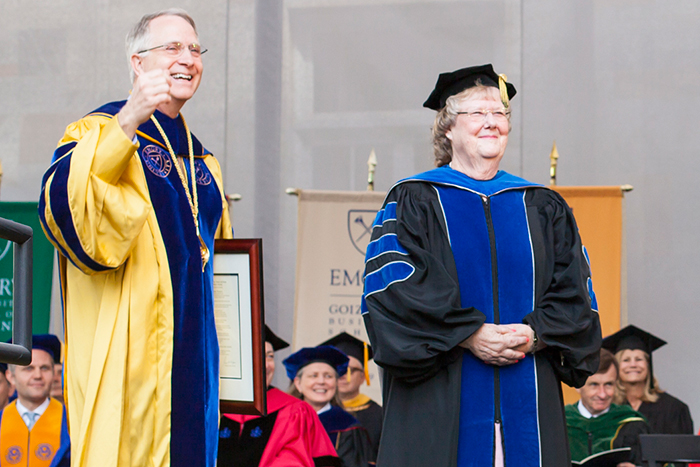 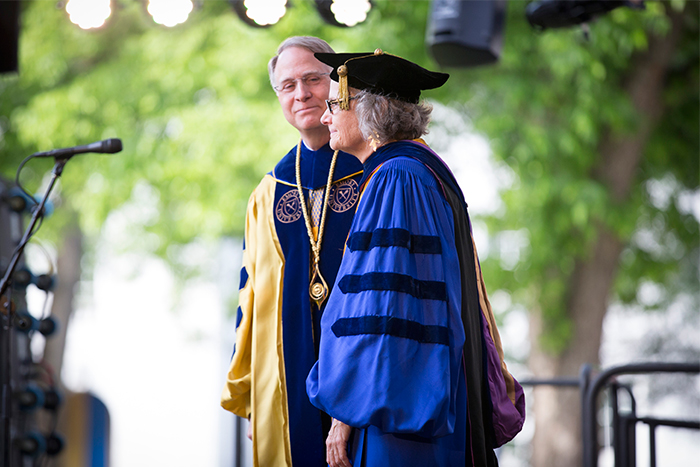 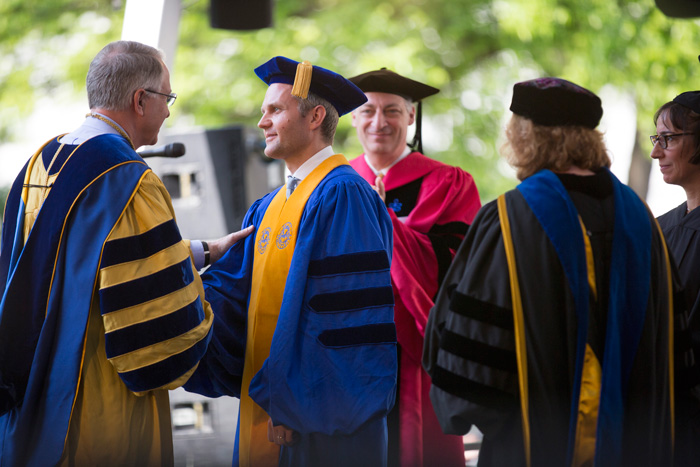 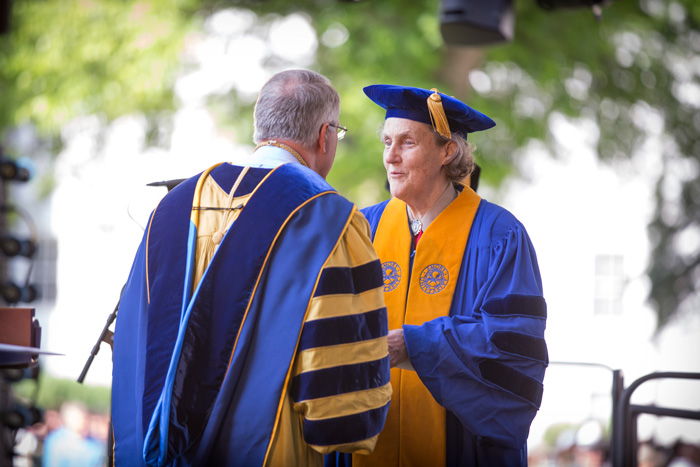 President Wagner congratulates Colorado State University professor Temple Grandin as she receives an honorary degree for her contributions as an autism advocate and expert on animal behavior. 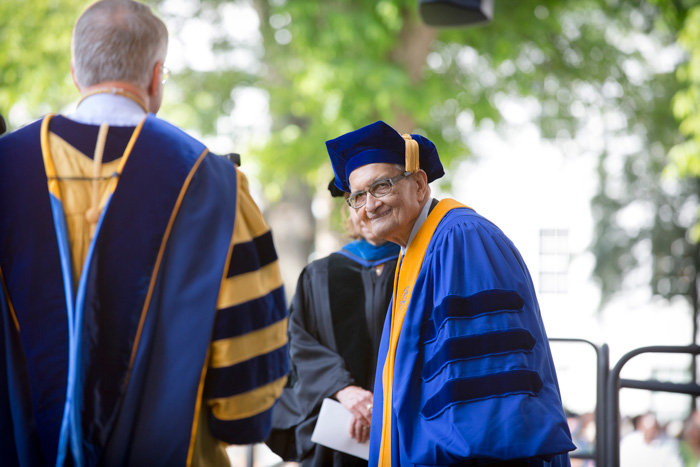 Nobel laureate and Harvard professor Amartya Sen receives an honorary degree for his groundbreaking research into welfare economics and the impact of economic policies on nations and communities. 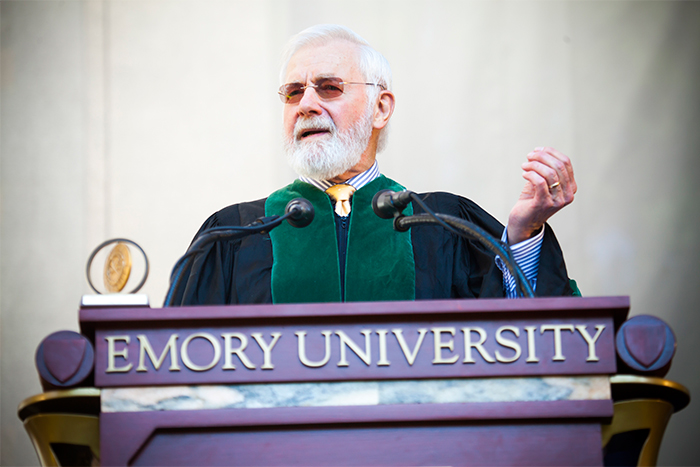 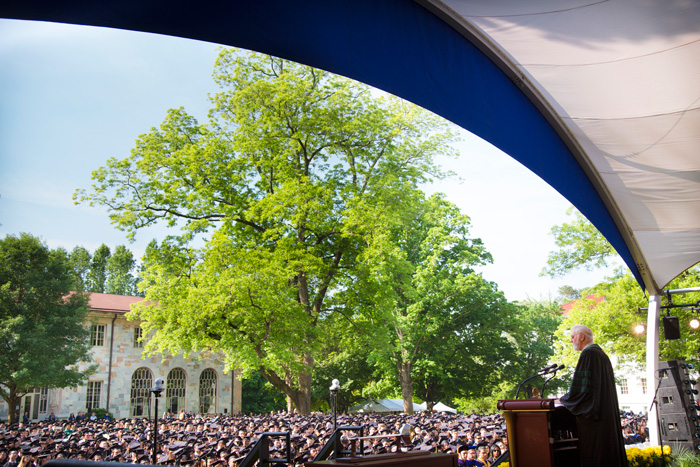 "Home is not where you are from; home is where you are needed," William Foege tells graduates at the end of his address. "As I congratulate you on what you have done, I also hope we all find our way home." 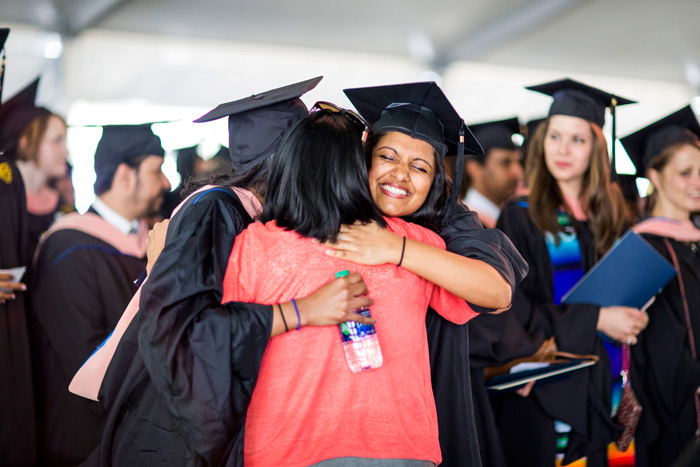 Graduates celebrate as they prepare to move on to the next phase in their lives, encouraged by President Wagner to "carry your creativity, excellence and character into the communities that await you."

After volunteering at local food pantries, Naomi Maisel founded Emory's chapter of Campus Kitchens, which saves about 1,000 pounds of potentially wasted food every month and converts it into healthy meals for those in need.

Selected to address his fellow graduates, TableTalk co-founder Ami Fields-Meyer will focus on how the Class of 2016 can use lessons learned at Emory to impact the world.

Haley Reid lost her father two weeks after starting nursing school, then excelled in her nursing studies while caring for her mother, who was diagnosed with cancer.

In Emory College, a behavioral biology major finds her voice

Growing up in rural Kentucky after being adopted from Vietnam, MacKenzie Wyatt knew how it felt to stand out. In the Class of 2016, she also stands out -- for her enthusiasm, her research and her work to help orphans.

Praised for his academic achievements and generous spirit, Will Eye credits his widowed mother for teaching him about compassion and plans to use his law degree to advocate for social change.

On May 9, Hurl Taylor, age 77, will march in his second Emory Commencement. Decades after graduating from Emory Law, he will receive a master's degree from Candler School of Theology to support his prison ministry.

Inspired by her own experiences growing up in West Africa and her work with vulnerable populations as an MD and MPH student at Emory, Aya Fanny vows to dedicate her life to improving global health.

For Howard Chiou, who will receive his PhD from Laney Graduate School, studying hospital culture through the lens of anthropology offers a way to understand and prevent medical errors.

Davie Zolowere served as a doctor and health officer in Malawi before coming to Rollins School of Public Health to earn his MPH. After graduation, he plans to return home to champion reproductive health.

Called the "founding mother" of the Rollins School of Public Health, professor Nancy Thompson is honored for almost four decades of service to Emory.

No recent stories are available.